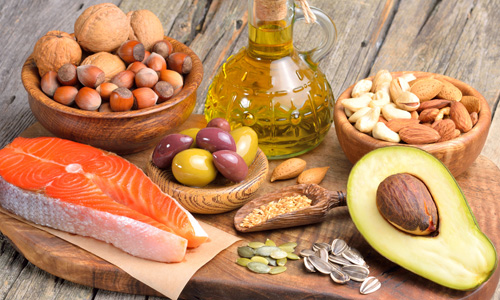 Posted at 21:02h in Company News by Thomas King

Looking at all the no-fat and reduced-fat foods in the grocery store, you might think that eating fat is some kind of revolutionary, new concept. But the fact of the matter is that there is nothing “newfangled” about eating foods rich in dietary fats. Humans all over the world evolved eating traditional diets full of naturally occurring animal and plant-based fats. What’s actually “newfangled” is all the processed foods that have had their natural fat content removed and replaced with artificial sweeteners and emulsifiers to give them some flavor back. These kinds of foods have really only been popular since the 1980s, and their popularity depends, in part, on the perpetuation of several myths about fat.

So let’s take a look at how and why this shift from diets rich in fats to high carb diets happened.

History Of The “Fat Is Bad” Lie
Before the 1960s, most Americans enjoyed a diet high in saturated fats and meat. Butter, milk, eggs, and red meat were staple foods. Frozen vegetables and convenience foods were on the rise—and so were the number of heart attacks.

In an attempt to explain the rise in cardiovascular disease, two studies gained the attention of nutrition experts and health organizations. Both studies reported that eating saturated fats, such as those found in butter, lard and red meat, was a heart attack waiting to happen. Once a dietary staple, almost overnight, animal fats came to be seen as harmful and unhealthy. Fat became bad.

So what were the two studies that had such influence on our love-hate relationship with fat?

Unfortunately, the Lipid Hypothesis fails to take into account that the majority of blood cholesterol is actually produced by the body itself. The reason the body produces cholesterol in the first place is to try to protect and repair damage from excessive inflammation. In other words, people with high plasma cholesterol levels are likely to have pre-existing health issues that cause their bodies to produce extra cholesterol.

Nonetheless the Lipid Hypothesis took root, and gave rise to several myths about fat. And, conveniently, it also became the basis of an entire pharmaceutical industry built around cholesterol-lowering patent drugs.

The Lipid Hypothesis gained acceptance, and led to the next theory. In an alternative attempt to lower cholesterol through nutrition, the Diet-Heart Hypothesis rose to fame while perpetuating similar myths about fat..

To control cholesterol levels, Keys’s hypothesis recommends that fat make up less than 30% of daily calorie intake. Keys was very successful in convincing members of the American Heart Association that saturated fats were bad, and blamed them for increased blood cholesterol, blocked coronary arteries and heart attacks.[2]

By 1977, The Government Urged Americans To Eat A Low-Fat Diet
Several government agencies (NIH, NCEP, AHA, USDA) promoted the Diet-Heart Hypothesis. It’s no surprise that the processed food industry quickly endorsed the idea.[3] Food scientists and processors began marketing a slew of reduced-fat “heart healthy” packaged foods. Aisle after aisle of grocery store shelves were filled with no- and low-fat versions of traditional foods like butter, sour cream, yogurt, milk, peanut butter and so much more. Low-fat foods were conveniently packaged and promised to save time, money and your health.

So did this low-fat, high carb, “heart healthy” diet trend produce the expected results? Not at all!

Unforeseen Side Effects
When you remove the naturally occurring fat from foods, they lose a lot of the flavor and the texture changes. So the new reduced-fat food industry had to heavily rely on adding in sugar, emulsifiers, fillers, gums, and chemically created synthetic fats. Food processors added artificial sweeteners and flavors to boost sales of bland tasting foods robbed of their natural fats.

Big food companies perpetuated the myths about fat by promoting their high carb, low-fat foods as healthy options for your body. One look at a low-fat product’s nutritional label, however, and the reason for obesity becomes clear—the amount of added sugars and calories per container is often astronomically high!

Food that’s high in refined carbs is usually quite devoid in nutrition, and does not provide satiety, despite the high calorie count. This is of course very convenient for the packaged processed food industry as it provides them with a steady stream of unsatisfied, hungry consumers who need to snack in between meals. You can see how Americans are some of the most malnourished yet overfed people on the planet!

Additionally, most consumers do not adhere to the specified serving sizes. This means that most of us have unknowingly been overeating sugar and carbs ever since the processed food industry introduced “healthy” low-fat foods. How’s that for irony?

Instead of seeing a dramatic drop in cardiovascular disease, we have seen:

Well, according to the Centers for Disease Control and Prevention (CDC), cardiovascular disease is still the number one killer in the US! The myths about fat simply do not hold up under scrutiny.

Eating Fat Will Make Me Fat.
This myth about fat goes back to the idea of “you are what you eat.” The problem is that it completely misses the point that there are many different types of fat and none of them have been proven to cause obesity. There is, however, mounting evidence that high-carb foods loaded with refined sugar and flour, and especially overconsumption of these types of food, can lead to obesity.

Eating Fat Will Increase My Risk Of Heart Attack.
This myth was the basis of the Diet-Heart Hypothesis. We now know that fat does not influence blood cholesterol. The body itself is the number one source of cholesterol, and it produces it in an attempt to protect itself from inflammation. By contrast, several scientific studies have shown that low carb high fat (LCHF) diets can improve blood lipid profiles.

My Body Needs Carbs For Energy.
Our bodies can burn carbs or fat as energy. By consuming a high-fat low-carb diet, our bodies switch from running on glucose to burning fat. This is called transitioning into ketosis. Ketosis is the basis of the ketogenic lifestyle. It is proof that your body does not need a lot of carbs to function optimally.

My Brain Needs Carbs To Function.
Most of the brain, like the rest of the body, can function on either glucose or ketones. A diet high in fat and protein will provide ketone bodies. The brain can run on ketone bodies for weeks, months, or years. And for those parts of the brain that must have glucose? Well, the body can turn protein into glucose through a process known as gluconeogenesis.

Is Fat Healthy?
Based on decades of misinformation, the processed food industry and so-called “nutritional experts” have fooled us into adopting a diet full of highly processed foods, adulterated ingredients, and unfounded promises. But if 50 years of the low-fat diet hasn’t lowered our risk of heart attacks, it’s worthwhile to really question all the myths about fat that we still hear everyday. Though the science disproves the myths about fat being bad for our health, all we have to do is look at the American diet before the 1950s to see that fat was not always bad… and still isn’t.