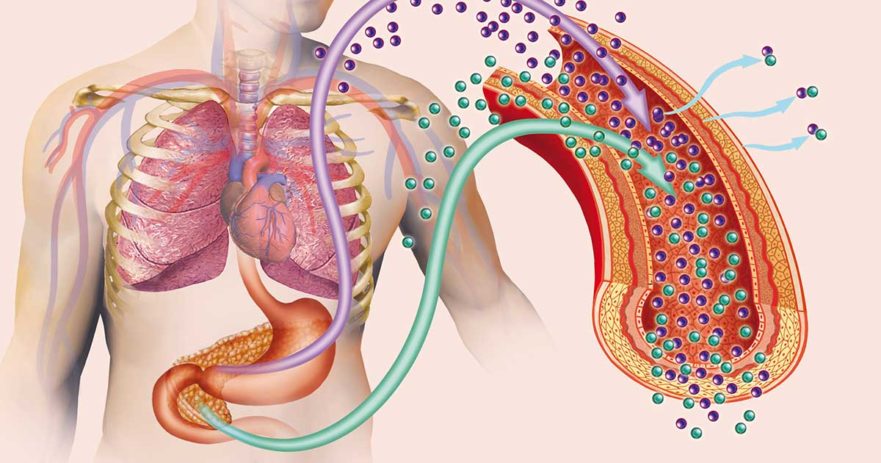 24 May Insulin Resistance and The Battle of the Bulge

I was working out almost every day and I still couldn’t seem to get rid of that last 10 pounds my body is hanging onto. My sister, who graduated from med school, suggested that I might be suffering from insulin resistance. For those of you who do not know, insulin is a hormone that is produced by the beta cells, which are cells that are scattered throughout the pancreas. The insulin produced is released into the blood stream and travels throughout the body. Insulin is an important hormone that has many actions within the body. Most of the actions of insulin are directed at metabolism (control) of carbohydrates (sugars and starches), lipids (fats), and proteins. Insulin also is important in regulating the cells of the body including their growth.
Insulin resistance (IR) is a condition in which the cells of the body become resistant to the effects of insulin, that is, the normal response to a given amount of insulin is reduced. As a result, higher levels of insulin are needed in order for insulin to have its effects. The resistance is seen with both the body’s own insulin (endogenous) and if insulin is given through injection (exogenous).

Insulin Resistance (IR) can lead to:

The primary treatment for insulin resistance is exercise and weight loss. In some individuals, a low glycemic or better yet a ketogenic diet can help. Take the first step and avoid the foods that cause your blood sugar to rise quickly. These include all types of flour products: bread, spaghetti, macaroni, bagels, rolls, crackers, cookies and pretzels; refined corn products and white rice; and all sugar added products.

It is suggested that you increase your intake of vegetables that grow above the ground, seeds and nuts. Eat very very few fruits and root vegetables (potatoes, carrots and beets) and when you do eat them only eat them with other foods. And make sure your diet is comprised of 20 percent lean proteins, 70 percent healthy fat (primarily unsaturated) and 10 percent low glycemic carbohydrates from cruciferous vegetables like kale, broccoli and cauliflower.

As I have adjusted my diet, increased my work out routine to at least one hour a day and made sure I am getting at least 8 hours of sleep per night I have found that my insulin resistance has decreased, and the weight slowly came off. This is not a onetime effort but, rather a lifetime commitment. I assure you if you adhere to it and make it a lifestyle it will pay off for a lifetime.